Today, blogging has become a lifeline of many online business and services provider and not only this, some people even use blogging as a tool to send their voice to millions of internet users and share their views with likeminded people. Earlier, when people were not aware about blogging, they have only 140 words of Twitter message to express their views on certain topic. Now blogging has not only become a way to express your feelings, but you some bloggers are even earning a full time income through guest blogging for some famous blogs.

If you are willing to make a blog for yourself, then there are many free and paid blogging platforms available on the internet. One of the main paid blogging platforms on the internet is Xanga. Xanga is one of the oldest blogging platforms where you can share your weblogs, social networking profile, and photo blogs. Xanga was launched in the year 1999 from New York. Xanga has many exciting features that are necessary for a great blogging experience. Earlier, Xanga was free for its users but recently they have changes their policy and now they take a yearly subscription fees for blogging on their platform. 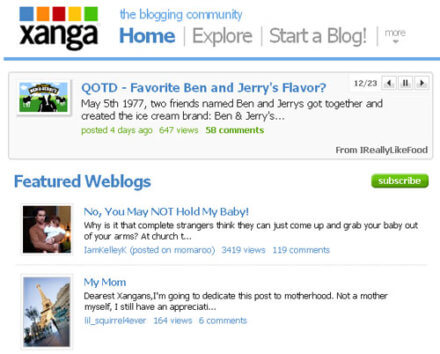 Xanga Started it All

Earlier, Xanga was the best blogging platform on the internet because of its ease of use and flexibility. Many people had made a blog according to their choice on this platform and it became very famous. Xanga had many features like weblog, photo blog, video blog, audio blog, and pulse. Xanga added weblogs as a very first feature on their platform in 2000 along with the concept of eProps. eProps is like a rating a user can give to another user depending on how much he has enjoyed the blog entry.

Xanga was the first company to launch subscription of their blogs through RSS feed. Today, this feature is widely used in most of the blogging platforms. Xanga became a popular photo community after its launch in 1999. Their video and audio blogs became very famous among internet users.

Xanga lost its lustre after facing many large volume DDoS attacks in the year 2007 and since then, it has been losing its grip as a reliable blogging platform. According to Alexa, which is a famous website ranking site; Xanga is no more a best blogging platform for users as it used to be in the earlier years.

The latest news is that this site is going through a major transition and they are no more available to the new users for their services. Xanga is providing a downloadable file of blogs to their earlier users so that they can upload it to other blogging platforms like WordPress. When I open the home page of this website all I could see were lots of information about how they have gone through a major downtime of their server. I afraid whether they are providing access to new users because there was not any sign up page on their website for new users.

If you are an old user of Xanga then you can go to their page and download your existing blog.

What's the Verdict on Xanga?

Xanga was a great website platform for its users in their golden days. Now they are no more available for sign up. Although, Xanga promises that they would launch their new platform as Xanga 2.0 as soon as possible but all we do till then is to wait for their new platform’s launch. Blogging has been a great way to not only express your feelings, but also get lots of critics and their comments. Many free blogging platforms like Xanga, Blogger, and Hubpages has become a great way for putting your views to millions of internet users. Xanga has been providing its 2 million blogs as a download to their users and they are looking forward to make a comeback.

Till then, all we can do is to hope this blogging platform should re-launch in the new avatar in front of its well wishers.