Creatine is an organic acid that is naturally found in vertebrates and they are responsible for supplying energy to the muscles should there be a demand. This could be the result of strenuous work or activities, but whatever the case, vertebrate’s livers create small amounts of creatine which is stored in the body. In 1832, creatine was isolated from the basified water-extract of skeletal muscle and was further studied. Now it has become one of the most studied sports supplement in the world, resulting in different kinds of creatine.

One of these is Kre-Alkalyn, a type of creatine that has a high pH level to slow down and even stop the conversion to creatinine. This means that once Kre-Alkalyn is ingested into the body, it remains intact and at full dosage levels when absorbed into the blood stream. Also, this type of creatine does not react with water, reducing water retention in the body. So if you are looking for what type of creatine-based supplement to use for your work, check out this review of Kre-Alkalyn and see if it is the right one for you. 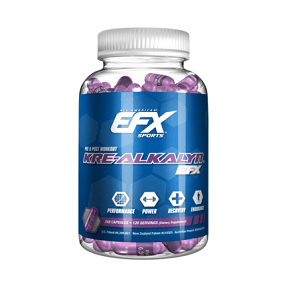 A former world-class bodybuilder turned scientist, Jeff Golini, invented Kre-Alkalyn and earned an official U.S. Patent in 2002. This formula is based on the concept that the lower the pH level of creatine, the faster it converts to creatinine and as pH levels were raised above 7, the conversion was slowed. The secret to Kre-Alkalyn is that they synthesize creatine molecules with a unique buffering agent to be able to reach a pH level of above 12, making it very stable.

The Kre-Alkalyn EFX is the main product and comes in 60, 120 and 240 capsule bottles. Costing $20.99, $22.49 and $34.99 respectively, you can choose to buy a few first to see how it works for you or get the biggest bottle for more savings. There are also many resellers of Kre-Alkalyn that you can buy from such as Amazon or most fitness stores online and some in areas near you so it is best to check them out and find the best deals for the best product.

Kre-Alkalyn has received a lot of praise from body builders, athletes and fitness buffs around the world as an effective creatine supplement providing them the extra strength they need for their activities.

Why is pH Important?

If creatine’ pH levels fall below a certain point, such as a 7 or lower, it loses some of its potency and therefore its effectiveness. However, a patented molecular buffering process during the synthesis of creatine raises the pH level up to 14, where the conversion to creatinine practically stops.

This way, you are able to get a creatine product that is pure, stable and does not lose its potency once absorbed into the body as it does not degenerate into creatinine like other type of creatine.

This buffering process has been patented by Kre-Alkalyn in two countries internationally with 33 pending as of this writing.

What's the Verdict on Kre-Alkalyn?

Because of the minimal water retention and maximum potency, Kre-Alkalyn is probably the best creatine supplement out there in the market. They provide a pure and stable substance that is not only effective but safe to take for most individuals. That said, it is always best to consult with your physician or to monitor your body’s reaction when taking health supplements. But if you are in search for a type of creatine to use, you can hardly go wrong with Kre-Alkalyn.