Comparakeet » Best Online Lottery Sites » Are Scratch Cards Worth It?

Are Scratch Cards Worth It?

The humble scratch card, by design, appeals to the very human desire for instant gratification. Many people are still hesitant to take their chances at the lottery, but give them a scratch card and most will no doubt scramble to see if it’s their lucky day. It helps that cards are pretty ubiquitous and easy enough to obtain, so more people are used to it. Plus, with the advent of virtual scratch cards, trying out your luck has never been easier.

But are they worth it? Is spending your hard-earned cash on scratch cards, virtual or otherwise, practical–especially with the presence of more lucrative online lotteries? The answer is not as cut and dried as you would imagine, and in this article, we examine why that is.

The Cost of Entry vs. The Odds of Winning 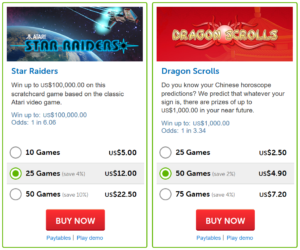 Most scratch cards are known for being a cheap way to gamble. And this is even more true with virtual scratch cards, where you can play 25 games for as low as $2.50. If you only look at the cost of entry, combined with the “instant win” potential, then the conclusion should be easy, right? Sure, going by what’s at the surface, scratch cards may very well be worth it.

But, that’s ignoring other factors.

Like other types of gambling, scratch cards operate on chance. That is, there’s no guarantee that you will win something every time. And, if you do win anything, there’s a huge chance that the prize isn’t astronomical. Take a look at this sample breakdown of the odds of getting winnings from National Lottery’s scratch cards:

As you can see, the odds aren’t that bad. Still, there are hundreds, if not thousands, of people all working towards the same prizes as you, so your chances of winning are still small in reality. And, just like lotteries: the higher the prize is, the more your chances of winning diminishes. After all, if it were easy to win, everybody would be rich, right?

Of course, people do win–it’s just that it’s not easy to win big. Sometimes, it may even require a sizable investment on your part. Just ask grandmother Grace Walker. She bought up to 30 scratch cards, which cost £1-£5 each, per week, for two years. She eventually won £1,000,000–but not after spending a total of nearly £15,000. 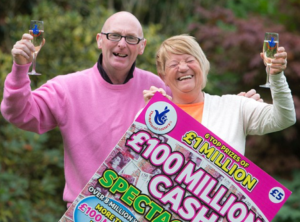 Not many people will have her dedication, nor the money, to continue buying scratch cards week after week, for two whole years. Most will have given up the first two or three weeks–or even after losing once or twice. Sure, if you buy up to 30 cards religiously every week, your chances of winning will go up significantly. It’s definitely not for everyone, though.

Lottery games, in general, are more lucrative than most scratch cards. Sure, scratch cards can offer big jackpots, but lotteries usually offer nine figure prizes in comparison. So, what advantage do scratch cards have over lottery games? Beyond the more approachable nature of scratch cards, the odds are far better here compared to the (appropriately) astronomical odds of lottery jackpots. 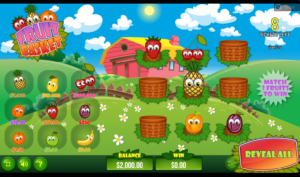 One of the virtual scratch cards offered at WinTrillions, for example, offer the chance to win up to $300,000, with a 1:3.34 odds. Meanwhile, the current odds of winning the Mega Millions’ jackpot is 1:258,890,850–which makes sense, given the amount of money at stake.

So, the trade-off is this: compared to lotteries, it’s much easier to win prizes with scratch cards, but the maximum jackpots usually don’t go up to nine figures. Plus, just like lottery, you’re more likely to win a small amount–or none at all.

Scratch cards are a very approachable form of gambling, but it comes with caveats in tow. Though the cost of entry is usually cheaper than lottery tickets, the prizes are nowhere near as big as what most lottery games offer. It’s easier to win with scratch cards compared to lotteries though, and that’s their biggest draw. Still, just like lotteries, there is a lot of luck involved, so don’t go expecting to win big right off the bat.

Is it worth sticking around for? It is if you don’t mind winning a smaller prize in exchange for better odds. If you want to win big, lottery is still the way to go. But here’s a better idea: why not go for both? Instead of blowing all your money on scratch cards on a weekly basis, invest some of your budget on a lottery game or two. Who knows? You could just win prizes in both.

Don’t know where to start playing the lottery online? Have a look at our list of the best lottery sites!