In this fight for VPN supremacy, ExpressVPN and IPVanish enter the ring to duke it out for the prize. Both strong contenders, these VPN providers deliver excellent performance with their large network of servers, excellent security feature set, and a strong stance on privacy. But only one walks away the winner. Find out which VPN outperforms the other in the article below.

A true heavyweight in the business, ExpressVPN is a premium VPN provider that delivers industry-leading performance. The service is owned by Express VPN International Ltd., and was first launched in 2009. Today, it stands to be one of the best VPNs available, and is incredibly secure – partly thanks to it being based in the British Virgin Islands.

IPVanish, on the other hand, is a VPN service from the US and started 10 years earlier in 1999. Owned and operated by Mudhook Marketing Inc., it’s regarded as a top contender in the VPN market and displays equally impressive capabilities.

Displaying how it’s at the top of its game, ExpressVPN possesses all the qualities of a VPN champion (minus a few flaws). Meanwhile, IPVanish manages to hold its own with its own set of strengths. But is it enough? A more comprehensive look follows.

You can read the full reviews of ExpressVPN here; and IPVanish here.

When it comes to VPNs, the geographical spread and total size of their network both play crucial roles in the end-user’s experience. Fortunately, both ExpressVPN and IPVanish are well-equipped to deliver in this department.

ExpressVPN boasts an impressive 2000+ servers that users can freely choose from. That’s more than plenty and should help ensure that VPN tunnels largely remain free of congestion. Listed below are the 94 countries where ExpressVPN servers are located: 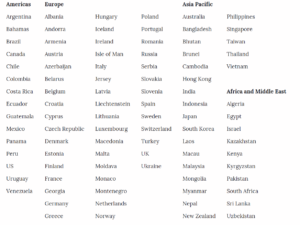 By comparison, IPVanish operates with half the capacity with total servers numbering at over 1000. That’s still a lot to choose from and should be sufficient for all users. Their servers are located in the following list of 52 countries: 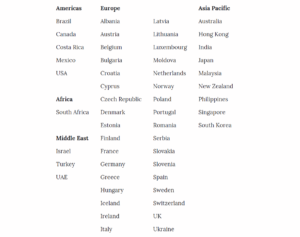 While IPVanish does offer a diversified range of server locations, ExpressVPN’s network of VPN tunnels – with almost double the number of total servers AND country locations – is vastly superior. No matter where you are in the world, connecting to a nearby ExpressVPN server should never be a problem.

Both premium VPN providers, ExpressVPN and IPVanish fall within a correspondingly premium price range. They’re among the most expensive options on the market – costing at least twice as much as the cheapest options out there.

Here is a quick rundown of the differences between the two services:

While some may consider IPVanish to be an expensive option already, ExpressVPN charges even more for their services. And with no free trial available for either one, committing to their plans may be out of reach for the budget-conscious. Thankfully, both providers promise a money-back guarantee without question.

Take note, however, that IPVanish’s has a much shorter window to test their services without risk. But even then, 7 days should be plenty of time to judge how well their VPNs perform. And with less expensive plans overall, IPVanish has the slight edge when it comes to pricing.

ExpressVPN and IPVanish are both top performers when it comes to maintaining high internet speeds. With their robust network of optimized servers, connections are fast, stable, and prove to be more than sufficient to meet the needs of users. They’re both very capable providers, allowing you to enjoy quick downloads and seamless multimedia streaming.

Both VPNs allow users to connect to P2P file-sharing services and freely torrent without any restrictions. They also let users access geo-locked content that would otherwise be beyond reach. However, online sources indicate that IPVanish is unable to bypass all the restrictions ExpressVPN can – with Netflix being the most important one.

So while both providers in question offer blazing-fast performance, ExpressVPN takes the lead in this round thanks to its ability to get around the more annoying geo-blocks on the internet.

At first glance, both ExpressVPN and IPVanish have nearly identical security features. And this is true for the most part. Both services rely on nothing less than the industry standard 256-bit AES encryption and provide plenty of supported protocols for users to choose from, including OpenVPN with UDP or TCP, PPTP, L2TP, IPsec, and IKEv2. Additionally, both VPNs are protected by IPv6 and DNS leak protection, and an automated kill switch feature.

When talking about privacy, the two VPNs again offer similar promises of not logging users’ online activities. This means neither of them store information pertaining to users’ IP addresses, DNS queries, and browsing histories. However, one key difference between the two companies provide a definite winner in this category.

ExpressVPN is based in the British Virgin Islands where a lack of data retention laws signify that users’ activities remain as private as possible. It also means that it’s outside the jurisdiction of even the most privacy-invasive countries. Contrarily, IPVanish is based in the US where government surveillance commonly takes place. If the authorities demand IPVanish to submit what user information they do have on file, then they’ll have to comply.

With that in mind, ExpressVPN becomes the obviously safer choice for users who want to ensure their privacy online.

IPVanish is compatible with the most popular operating systems and devices. They offer native apps for Windows, Mac, iOS, Android, and Kindle Fire TVs and game controllers. The VPN can also be set up to connect through Linux, Chrome OS, Windows phones, and routers.

On the other hand, ExpressVPN is compatible with a wider range of devices. With native apps for Windows, Mac, iOS, Android, Linux, BlackBerry, and Kindle Fire TVs and game controllers, users can simply download the software from official channels without having to manually tinker with configurations. Some routers also support the ExpressVPN router app to make setting up a breeze. For other unsupported models, users will have to manually set it up themselves. The same is true for other devices like Windows phones, Xbox, Playstation, and Apple TV. Finally, ExpressVPN also has browser extensions for Firefox, Chrome, and Safari.

Covering all the devices IPVanish supports, plus a host of others, ExpressVPN is the better all-around alternative.

ExpressVPN limits users with a 3 device restriction, while IPVanish gives more freedom with its maximum of 10. But keep in mind that you can get around this limit by installing the VPN directly into your router. Users can make use of this workaround on either service.

Another less cost-effective solution would be to purchase additional subscriptions – wherein IPVanish is still the better choice due to its lower price tag.

Both ExpressVPN and IPVanish provide thorough instructions on how to properly set up their VPNs on users’ devices. With handy visual guides, troubleshooting pages, and meaty FAQ sections, both providers give users the tools they need to self-help themselves.

The ace up ExpressVPN’s sleeve, however, comes in the form of an excellent live chat feature. It’s available 24/7 on their website and responses are quick and informative. It’s truly a helpful addition for users to get answers to any of their relevant concerns. Sadly, this feature is nowhere to be found on IPVanish’s page. Users will have to make do with email correspondence to get in touch with customer representatives.

ExpressVPN walks away from this fight the clear winner. If you’re still deciding between the two, you might as well spend those few extra dollars and go for the overall better option. The jump in price isn’t that huge, and with it comes more functionality, a better backbone of VPN servers, and the best customer support in the industry. The only tangible setback is the imposed limit of 3 simultaneously connected devices. But that’s easy to overcome and overlook if you look at the entire package.