Many VPN users have been raving about ExpressVPN and PrivateVPN, but which of these two has the better overall value? The former is known as an industry heavy-hitter, but the latter is no slouch, either! To be deemed the more superior VPN, the ideal provider should at least offer above average performance, security, and reliability. Read on to see which of these two fits the bill!

ExpressVPN has been a crowd favorite since it entered the VPN scene back in 2009. Owned by Express VPN International Ltd., this British Virgin Islands-based VPN provider has consistently proven to be a top performer when it comes to speed, reliability and security.

PrivateVPN set up shop in 2008 and has since enjoyed moderate, albeit consistent, praise among many users over the years. Based in Sweden and run by Privat Kommunikation Sverige AB, this VPN provider boasts excellent speeds, impressive uptime, and tight security.

When it comes to VPN services, the more servers and server locations, the better. ExpressVPN excels in this regard, with more than 2,000 servers spread across 148 locations in 94 countries. They host servers in countries such as: Argentina, Austria, Australia, Bahamas, Bangladesh, Brazil, Canada, Colombia, Denmark, Germany, India, Israel, Kazakhstan, Kenya, Mexico, Panama, Philippines, United Kingdom, United States, and a whole lot more. 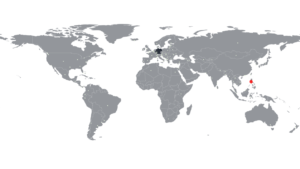 Thanks to ExpressVPN’s large server network and healthy server geo-diversity, users all over the globe should have no problems finding the fastest servers relative to their locations. Better yet, for those that need to mask their IP to circumvent internet censorship, the large server network can certainly help with that.

Meanwhile, PrivateVPN only offers a little over 100 servers, making their network one of the smaller ones in the industry. On its own, it’s a decent number, but it definitely pales in comparison to ExpressVPN’s vast server network. The fact that their servers are located in over 56 countries somewhat makes up for this shortcoming though. 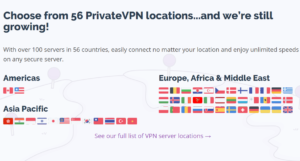 ExpressVPN is known in the industry for their pricey subscription plans. The month-to-month plan in particular is their most expensive offering to date, clocking in at a hefty $12.95/month. Luckily, you can save a few dollars a month by going for the longer subscription terms.

It doesn’t help that they don’t offer a free trial, but at least they do offer a generous 30-day money-back guarantee as a safety net. So, even if you end up being unsatisfied with the service during your first month, you can get a full refund, no questions asked.

PrivateVPN, on the other hand, offers very reasonable prices, especially on longer subscription terms. Even better, if you manage to catch the limited-time deal that occasionally pops up, you can get a free month if you go with a one-year subscription!

To spice things up a bit, PrivateVPN also runs a referral program wherein you can get additional days of service for free for every referral that successfully purchases a subscription.

You can also try out their service for 7 days at no cost—though you would have to request an activation code from support. Slightly inconvenient, but worth it. Finally, you can also take advantage of PrivateVPN’s generous 30-day money-back guarantee.

Here’s a side-by-side look at both VPN providers’ subscription plans:

ExpressVPN and PrivateVPN both offer above average performance in terms of speed and reliability. Both offer lightning-fast connections with negligible drops in speed, allowing you to comfortably watch HD content uninterrupted or download files quickly. Here’s a quick overview of what else you’re getting:

On either VPN provider, unlocking geo-restricted websites or circumventing censorship is a breeze. Even better, you can also use P2P file sharing networks unrestricted or access geo-blocked content on Netflix (among other streaming services). And with unlimited bandwidth, you can download or stream to your heart’s content!

PrivateVPN is built for speed, privacy, and online freedom.

That said, you might get better mileage out of ExpressVPN and its vast server network in the long run. PrivateVPN’s smaller network means that if servers near you go down, you’re left with a very limited selection. That’s all theoretical though. Both VPN providers have excellent uptimes, so dropped connections are pretty rare. Still, it’s something to keep in mind.

Performance-wise, however, ExpressVPN and PrivateVPN are both winners.

Your private information is safe with both ExpressVPN and PrivateVPN. Both secure connections with historically tough-to-crack AES 256-bit encryption, which is the same encryption technology that militaries and governments use. Along with DNS/IPv6 leak protection features, your personal information is guaranteed safe from prying eyes at both VPNs.

And if a server fails, both VPN providers also provide automatic kill switches that will immediately block any incoming and outgoing traffic to your device, thereby preventing any of your personal information from leaking out.

Both VPNs also offer multiple connection protocols. Check out the comparison below:

You’ll also be glad to know that both ExpressVPN and PrivateVPN have true zero logs policies. In other words, they don’t keep logs of your online activities whenever you’re connected to their VPN servers. ExpressVPN takes things a step further though.

The company runs and owns all the DNS on their servers, so connections are more secure. Plus, ExpressVPN is also compatible with the Tor Onion network, if you want enhanced online privacy and anonymity.

As you can see, it’s a pretty close match as far as security is concerned. However, ExpressVPN does offer a bit more than PrivateVPN, so this round goes to them.

Both ExpressVPN and PrivateVPN work on a wide range of platforms, especially when you install it on a router. ExpressVPN is, however, natively compatible with more devices right out of the box. Check out the comparison below:

Luckily, you can use a router to bypass these restrictions on both VPN providers. But if you don’t have the supported routers, you’d have to choose between buying a supported model or purchasing another VPN subscription plan. But, at the very least, you can hold off from doing that just a bit longer if you choose PrivateVPN.

Both ExpressVPN and PrivateVPN offer excellent support materials. From in-depth self-help articles to very informative video guides, both VPN providers make it easy for anyone—regardless of tech-savviness—to get up and running quickly.

That said, ExpressVPN has the clear advantage when it comes to live support. They reply almost instantly on live chat at almost any hour of the day, while PrivateVPN’s live support doesn’t seem to be available 24/7. If you need instant help, ExpressVPN is your best bet.

While PrivateVPN is cheaper and supports more simultaneous connections out of the box, ExpressVPN proves that you’re getting great value for what you pay for. Not only does ExpressVPN work with more platforms, they have a much bigger server presence around the globe. Plus, they also have slightly more security features and actually offer live help options. Sure, they are one of the most expensive VPNs around, but wouldn’t you rather pay more to get a better experience?