Panama-based NordVPN is quite popular among VPN users, thanks to a suite of powerful features that puts a premium on user experience, privacy, and internet freedom. With thousands of fast servers around the globe and a true zero logs policy, NordVPN is perfect for a wide range of applications—such as P2P file sharing, video streaming, and more. And thanks to features like DNS leak protection, an in-depth kill switch, and industry-leading encryption, you can connect to the VPN with some added peace of mind. But with an above-average price tag for its month-to-month plan, it begs the question: is it worth it? Read on to find out!

When using VPN, you’re essentially giving a company outside of your ISP the keys to your internet activity. This is why it’s critically important to know who you are dealing with. Below is a quick overview of NordVPN as a company.

The 1-month plan is the most expensive out of the three, with a rather hefty $11.95/mo. price tag. However, if you go for the longer subscription terms, the monthly cost is reduced by around 50-70%, depending on which plan you go with.

Better yet, NordVPN also offers a special subscription promo that gives you 3 years’ worth of service for just $2.75/mo.! However, this is a limited-time offer so you better hurry before it ends. 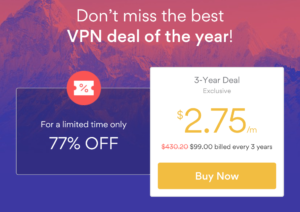 But if 3 years seems like a very long commitment for a VPN service, check out which of their three core plans works best for you:

Not sure whether NordVPN is for you or not? Luckily, you can find out for yourself thanks to their 3-day free trial, which you can sign up for by simply providing your email—no credit cards required. Pretty easy! What might prove difficult is finding the link to the trial itself. Hint: it’s buried in their FAQs!

That small quibble aside, it’s great that NordVPN allows users to take their service out for a test drive when so many others don’t. Plus, they have a 30-day money-back guarantee on all subscriptions as well. But take note that refunds aren’t given out instantly. In fact, in some cases it could take up to a month. While that’s not a huge deal-breaker, it’s easy to see how it could be an unpleasant experience for some people.

Mode of payments being accepted include:

NordVPN offers an impressive network that consists of 4,350 servers located in 62 countries around the globe. In the Americas alone, there are 1,987 servers, while Europe boasts 1,982. In Asia Pacific, they have 333 servers, and a total of 54 servers located in Africa, India and the Middle East.

A small sample of their servers.

What all this means is that finding the most optimal server relative to your location should be a cinch. And it is—especially since the company allows you to search by country and by server type.

For example, if you want to use NordVPN for streaming content, you simply choose servers that are optimized for video streaming. The company also provides servers optimized for P2P networks—which is perfect, since they offer unlimited bandwidth and unrestricted P2P file sharing access.

Meanwhile, their DoubleVPN servers encrypt connections twice for an added layer of security. What happens is NordVPN relays your VPN-protected connection to yet another VPN server before gaining access to the worldwide web.

However, this is a rather unnecessary—not to mention impractical—step. NordVPN’s 256-bit AES encryption is strong enough on its own already, so chaining two VPN connections seems superfluous. But if you really want twice the encryption, then be prepared for drastically reduced speeds.

Alternatively, if you’re looking for improved anonymity and privacy, connecting to a server specifically configured for connecting to Onion over VPN should do the trick. With this server-type, NordVPN routes your traffic to a VPN server and then funnels it through the Onion network, thereby allowing you to browse the internet anonymously. Connecting to Onion over VPN servers will likewise slow down your connection speeds, however.

Meanwhile, if you prefer connections that rarely drop, NordVPN also offers anti-DDoS servers. But, if you need to use VPN for IP-sensitive applications (such as mobile banking), then servers optimized for dedicated IPs are perfect. It’s clear that the company put some thought into their server offerings—and it’s that extra attention to detail that makes them stand out among the sea of me-too VPN providers. Kudos to NordVPN!

That said, what some may find disappointing is NordVPN’s lack of city-specific searches. It’s not a big deal though, especially since you can search servers by country just fine. It only really becomes a problem if you want to access certain content by region/state.

How is the Performance of Their VPN Servers?

Generally, NordVPN’s servers performed well in most conditions. Connections were quite stable and when connected to the nearest server, speeds were expectedly above average. When connected to servers on the other side of the world, download speeds were admittedly a bit slower.

The good thing is that websites still loaded up quickly and video streaming never turned into a buffering mess. And thanks to NordVPN’s various server-types, it’s easier to find an optimal connection for what you’re trying to accomplish online.

Watching Netflix on a server that’s been optimized for video streaming was an absolute joy, for instance. And their proprietary SmartPlay feature—which allows you to enjoy the security of VPN connections and the speed and stability of a Smart/Dynamic DNS rolled into one—makes the whole experience much more enjoyable.

HD videos loaded up in no time, with practically no buffering. And, because NordVPN is one of the few VPN providers left that can unblock Netflix’s country-specific content, binge-watching has never been better!

On the other hand, when connected to their DoubleVPN servers, connection speeds were noticeably slower and, on some occasions, a bit sluggish. As explained earlier, this is to be expected. Encrypting one connection is already taxing on a CPU, so can you imagine how much more taxing routing traffic through two subsequent VPN servers is? That’s the trade-off for more security.

Take note, however, that your mileage may vary depending on the base speed of your internet plan. Those with 30mbps speeds or higher may experience very negligible reductions in download speeds, even when connected to the DoubleVPN or Onion over VPN servers.

How Secure is NordVPN?

NordVPN connections are guaranteed secured, thanks to industry-leading 256-bit AES encryption. This same encryption technology is used by the U.S. government and the NSA. In addition, NordVPN also uses the IKEv2/IPsec protocol which is said to be so secure that not even the strongest computers can crack it. This protocol is the default VPN connection protocol for iOS and macOS devices. Additionally, advanced users can also take advantage of L2TP/IPsec and PPTP protocols.

NordVPN also utilizes OpenVPN, an open-source protocol known for its reliability, speed, and security. OpenVPN’s versatility allows you to use either TCP or UDP ports, depending on your needs. TCP ports is used more for general web browsing, while UDP is commonly used for online gaming and live streaming applications. To protect user data, OpenVPN utilizes AES-256-CBC encryption.

But while military-grade encryption and top-tier VPN protocols are already plenty secure, those only keep prying eyes far away from your browsing data. What about malware? Enter NordVPN’s CyberSec feature, which offers a three-pronged approach to securing your device. It:

Beyond encryptions, protocols, and CyberSec (as well as the aforementioned DoubleVPN), NordVPN also offers DNS leak protection and an automatic kill switch. The former prevents any sensitive data from accidentally leaking outside of your VPN connection, while the latter can completely cut off all traffic in case a VPN server fails. But, that’s not all.

What’s interesting about NordVPN’s kill switch is that it also allows you to specify which process to kill and which to keep. For example, you could set it up so that your P2P client will stop sending and receiving traffic once the kill switch is activated, but not your browser. It’s a very cool feature—one that other VPN providers hopefully adopt soon.

As far as privacy is concerned, you will glad to know that NordVPN offers a true zero logs policy. Thanks to Panama having no data retention laws, you can rest easy knowing that the company does not keep any log of your online activity. This means they don’t keep data like users IP addresses, bandwidth used, time logged on and off, and the like. The only user information NordVPN keeps are: username, email, and payment information.

What Devices are Supported?

NordVPN works on a variety of devices that run on Windows, macOS, Linux, Android, Blackberry and iOS. You can also download extensions for Chrome and Firefox or set it up on a wide array of routers.

Check out all the supported platforms below:

How Many Devices Can I Connect to NordVPN?

Users can connect a total of 6 devices at the same time, but there is one caveat: you can only connect three devices to the same server. Plus, doing so means you must use a different connection protocol for each of your devices—one though OpenVPN TCP, one through OpenVPN UDP, another through IKEv2 and so on.

The good news is that if you install NordVPN on a router, you can connect as many devices as you want because the router itself is only counted as 1 device. That should free up two more slots if you’re looking to connect to one specific server.

NordVPN earns praise for the helpful FAQs and the comprehensive setup guides they offer. Likewise, their live chat support deserves applause for the quick response time and the very helpful and knowledgeable agents. Unfortunately, they don’t offer phone support, but it’s not a deal breaker since their live chat is already well-implemented. Finally, if you’d rather write them an email, you can do that, too.

What's the Verdict on NordVPN?

NordVPN is a fantastic option for those who want some added peace of mind to go along with a speedy, easy to use VPN service. The option to choose servers optimized for specific tasks makes them stand out among their peers—a few drawbacks notwithstanding. Whether it be mobile banking, P2P file sharing, circumventing censored sites, or watching HD content on Netflix, NordVPN can handle whatever you throw at it. Some users may find the (sometimes) slow refund process or the expensive 1-Month plan hard to swallow though. But, given how NordVPN excels in so many other areas, these are nothing more than small caveats in the grand scheme of things.