Two VPNs engage in a showdown to prove which one is the superior choice. On one side, NordVPN stands tall with an intimidating set of features that could scare off any competitor. On the other, IPVanish poses a sizeable threat backed up by a great track record of excellent performance. But which VPN will overpower the other? Read the rest of the article to find out.

NordVPN, a service owned by Tefincom co S.A. and based in privacy-friendly Panama, is a VPN provider that was launched in 2008. It’s regarded as being the VPN of choice for users with high security needs and provides excellent performance thanks to its many features offered.

Going head-to-head with it is much-older and US-based IPVanish – a service provided by Mudhook Marketing, Inc. Launched in 1999, it’s been around long enough to solidify its position in the market with its top-tier performance and a complete set of VPN essentials.

You can read the full reviews of NordVPN here; and IPVanish here.

IPVanish servers amount to over 1000, which are located in over 52 countries worldwide. An impressive offering in itself, it still pales in comparison to NordVPN’s truly mammoth network of over 4000 servers spread over 60 countries.

Below is an overview of how the two VPNs compare. The leftmost column lists countries that NordVPN has servers in and IPVanish doesn’t, while the rightmost column lists the reverse. The countries listed in the middle columns are common to both VPNs. 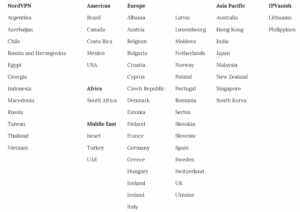 With more server locations in every continent (except Antarctica), NordVPN demonstrates why it’s one of the best choices available now. With better coverage and four times the number of servers than its competitor, NordVPN kicks off this showdown with an undeniable lead.

The monthly plan for NordVPN is one of the most expensive ones on the market. At $11.95 per month, it’s by no means cheap. But IPVanish’s monthly pricing of $10.00 isn’t affordable either. They’re both premium services, and charge customers accordingly.

Upon closer inspection however, NordVPN is the better value option when you opt for longer subscription periods. Their yearly plan is already less costly than that of IPVanish’s. And if you go for their 2-year plan, the service suddenly becomes one of the most cost-effective solutions on the market.

Additionally, NordVPN occasionally offers an even sweeter deal with their 3-year plan for huge savings. 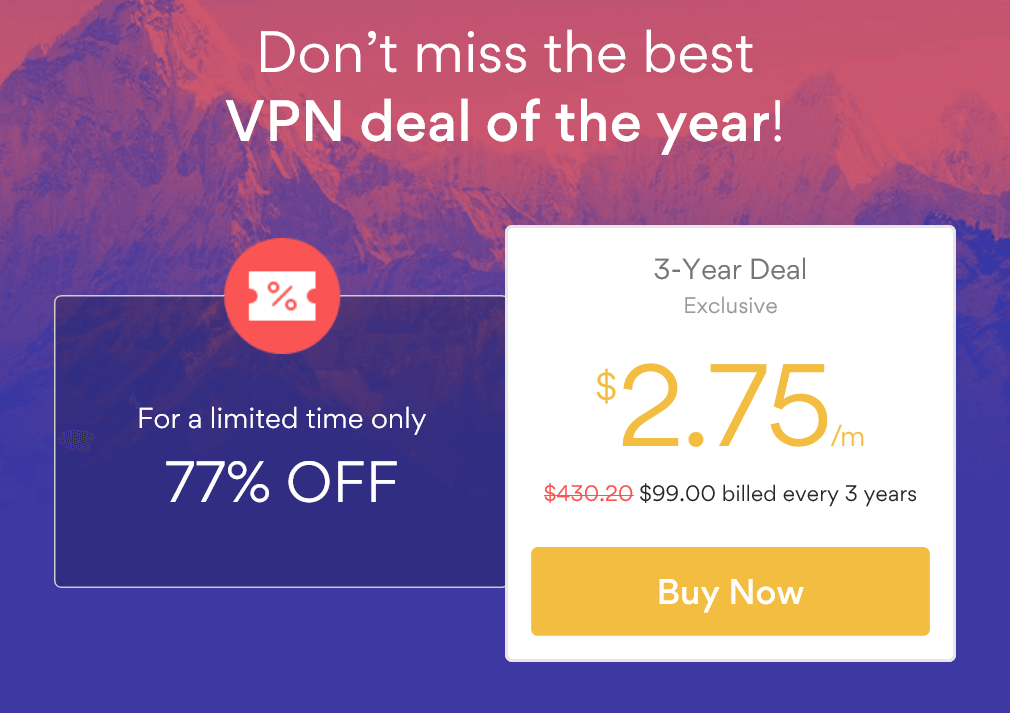 Here is a quick comparison of the two VPN’s pricing:

It’s also easier to test out their service risk-free thanks to a free 3-day trial and a longer money-back guarantee window. But do take note that reports show that NordVPN may take a while (up to a month) to process your refund. Kind of annoying, but not big enough a problem considering everything else.

NordVPN and IPVanish perform great in terms of maintaining fast internet speeds. You can expect to see minimal loss in bandwidth even while rerouting your traffic through their tunnels; allowing you to browse and stream media as comfortably as you would without a VPN. But make sure to connect to servers that are geographically near to you, or you might experience more significant loss in performance.

Both VPNs also host servers optimized for P2P and the like – allowing you to freely torrent files on those services. They also unblock most geo-restricted sites, giving you access to content that may be normally inaccessible. Unfortunately, for some of the more popular one like Netflix, IPVanish falls short as their IPs remain blocked by the multimedia giant.

NordVPN, on the other hand, isn’t limited by such restrictions. It maintains its lead in this department thanks to being one of the few VPNs capable of accessing Netflix US.

NordVPN is commonly regarded as the most secure VPN out there. It’s protected by AES 256-bit encryption – military-grade security that’s virtually uncrackable – assuring you that your data is safe and privy only to you. Not even NordVPN would know about your internet activities as they stick to a no-logs policy which means they don’t store any information regarding your browsing and download history.

Supported protocols include OpenVPN via UDP or TCP, and IKEv2/IPSec. Technically, you can choose to use L2TP/PPTP with their service, but the company highly discourages this due to it not being as secure as other options. A built-in kill switch, DNS and IPv6 leak protection are also added safeguards to ensure your security online.

Now, IPVanish is also plenty secure. It actually offers the same security features listed above – 256-bit encryption, support for multiple protocols, and a zero logs policy – meaning you can opt for either service and be assured of top internet security and privacy. However, NordVPN goes the extra mile by offering several features that IPVanish doesn’t. These include:

With all the added security that NordVPN offers compared to IPVanish, it’s clearly the better choice for the more privacy-conscious user.

NordVPN works on a wide range of devices and native apps are available for easy installation on Windows, Mac, iOS, and Android. For other operating systems – including Linux, BlackBerry, ChromeOS – and a vast range of routers, handy step-by-step guides can be found on the NordVPN official website. Browser add-ons for Firefox and Chrome are also supported.

By comparison, IPVanish is also compatible with the devices listed above, except the company doesn’t offer any browser extensions. They do, however, have a native app on the Amazon app store – something that NordVPN doesn’t – that makes it possible to easily set up the service on your Kindle Fire TV or game controller.

NordVPN allows for 6 of your devices to be simultaneously connected to the service. The caveat, however, is that if you want to connect them to the same server, you must use different protocols for each device. This means that you can connect up to 4 devices to one server (via OpenVPN UDP, OpenVPN TCP, PPTP, and L2TP). For your remaining 2 devices, you’ll have to choose a different server. It’s a bit complicated and clunky, but a good workaround is to install the VPN directly into your router to avoid all this hassle.

On the other hand, IPVanish allows for 10 simultaneous connections, which is more than what most VPN providers allow. Even better, they allow devices to connect through the same protocols as long as only a maximum of 1 is connected via PPTP or L2TP. And as usual, it’s better to just install the VPN on your router to bypass all these restrictions.

Both NordVPN’s and IPVanish’s websites contain plenty of helpful information for customers to find the solutions to their VPN-related problems. With thorough setup guides and meaty FAQ sections, subscribers of either service should have no problem troubleshooting things on their own.

However, NordVPN takes it even further with a responsive live chat feature. It’s available around the clock, seven days a week. Customer representatives are also very accommodating and knowledgeable, so any concerns you might have can be addressed immediately.

NordVPN – with its unparalleled security and truly impressive network of VPN tunnels – is the better VPN by a significant margin. Add to that their superior customer support, more affordable long-term subscriptions, and the ability to unblock the most popular streaming services, and it’s easy to see why NordVPN wins this showdown.