Both excellent VPNs in their own right, PrivateVPN and IPVanish provide complete tools in ensuring top-grade security and privacy when online. But which service has what it takes to outshine the other? In this showdown between two very capable VPN providers, only one can come out on top. Read on to find out which of the two takes the prize.

PrivateVPN is a VPN service owned and operated by Swedish company Privat Kommunikation Sverige AB. It was launched in 2008 and now stands as one of the leading names in the VPN market. Its reputation is truly well-deserved – backed up by a consistent track record of great performance and highly secure networks, all delivered at a very reasonable price point. Perhaps the king when it comes to value, PrivateVPN is one VPN that’s definitely worth trying.

Meanwhile, much-older and US-based IPVanish is another a VPN that’s worthy of consideration. It’s right up there on the same tier as PrivateVPN – offering similarly powerful security and excellent performance. Launched in 1999 and owned by Mudhook Marketing, Inc., IPVanish is one VPN provider that could give any other a run for its money.

You can see that each provider has their own set of pros and cons. They’re similar for the most part. But closer inspection should reveal which one manages to take the lead. It’s a close fight, and determining the winner involves a more in-depth analysis of each provider’s capabilities.

At a glance, however, PrivateVPN takes the lead.

PrivateVPN has a relatively small network of VPN tunnels around the globe. Numbering at just over 100, it definitely pales in comparison to IPVanish’s network of 1000+. In terms of geo-diversity however, both companies are tied – having a similar spread of servers worldwide. 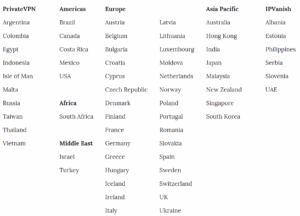 What does this mean for you, the user? Essentially, a smaller selection of servers means that finding the optimal one might be more difficult. So even though PrivateVPN has marginally better geo-diversity, IPVanish takes the win in this round thanks to its much larger infrastructure of VPN servers.

The appeal of PrivateVPN is very much attributed to its excellent value for money. With very reasonable pricing, their service competes with the industry’s finest complete with all the necessary features a VPN should have.

In comparison, IPVanish comes with similar functionality but at a price that’s closer to more premium brands. It’s a pretty large difference between the two services. Other factors also make IPVanish much less accessible.

Here is a quick comparison of the two VPN’s pricing:

In terms of pricing, PrivateVPN simply blows IPVanish out of the water. With lower prices overall, a bonus freebie for the yearly plan, a longer money-back guarantee window, and a free trial available, PrivateVPN is miles ahead in this category.

When it comes to performance, PrivateVPN scores above the industry average. Users can expect slight dips, but should still be able to maintain the speeds necessary for comfortable browsing and streaming of large multimedia files – which is great since PrivateVPN is able to unblock Netflix. Yes, it’s one of the few VPN providers that promises to bypass those pesky geo-restrictions and allow you to unlock the entire repertoire of titles available on Netflix US.

By contrast, IPVanish is sort of the reverse. It’s one of the faster VPNs on the market today, with users reporting impressive speeds even while going through their tunnels. But unfortunately, their service is blocked by Netflix servers. You’ll have to make do with what’s normally available in your country.

In this regard, PrivateVPN and IPVanish represent a tradeoff between speed and functionality. On one side, you get full access to Netflix at the cost of some speed. And on the other, you get fast connections in exchange for access to some of your favorite shows. They’re not exactly tied, but both have their merits.

Security is no problem for either PrivateVPN or IPVanish as their VPN tunnels are protected by the same military-grade 256-bit AES encryption. Connection types supported are also similar for both services. These include OpenVPN with UDP or TCP, PPTP, L2TP, IPSec, and IKEv2. SOCKS5 web proxy is also an option for either VPN provider. For additional security, both VPNs also have a built-in kill switch that kicks in should you lose your connection to their tunnels, as well as IPv6 and DNS leak protection.

Also, both PrivateVPN and IPVanish promise to keep no logs of its users’ data sessions. This means that your IP address, DNS requests, websites visited, connection times, etc. are not stored on their servers. Both companies only store the minimum account information needed to maintain and operate their services.

However, even with all these security measures in place for both VPN providers, there is one drawback. And that, too, is shared between the two contenders here. It has to do with the countries in which either VPN provider is based – Sweden for PrivateVPN, and the US for IPVanish.

Both of these countries are part of the Fourteen Eyes – a group of nations that gather signals intelligence from its citizens, including their internet activities. Effectively a form of surveillance, the Fourteen Eyes agreement makes servers located in these countries subject to government scrutiny and investigation. Simply put, your data and personal information may be at risk of exposure should the authorities come knocking.

With nearly identical characteristics in this category, both PrivateVPN and IPVanish are plenty safe for the average user. A wide array of encryption protocols make using either service both flexible and secure. And with both providers promising to keep no logs of your online activities, you can be sure these remain private. For this round, it really boils down to which country would you prefer your VPN provider be based in – Sweden or the US?

In terms of platform compatibility, PrivateVPN and IPVanish are pretty much evenly matched. Both are readily available for download from their respective official websites – with applications for the most popular operating systems (Windows, Mac, iOS, and Android). Both VPNs also have apps in the Amazon app store to use with your Kindle Fire TV or game controller. You can also set up either VPN on Linux, Chromebooks, and routers.

In other words, anything you can install PrivateVPN on is capable of running IPVanish as well. And with that, it’s safe to say that both VPNs are again tied for this round.

PrivateVPN allows each subscription a maximum of 6 simultaneously connected devices. IPVanish, on the other hand, allows for 10. It’s not a big margin, and really not a huge deal since PrivateVPN can be configured to operate on your router – allowing you to bypass this restriction anyway. Similarly, you can use the same method to bypass IPVanish’s device limit. Not that most people would need to, but still.

If you don’t have a supported router model, you can also go another route and purchase additional plans to add connectivity to more of your devices. It’s not the most practical solution, but if you were to go this route, PrivateVPN is the better choice here with its more affordable pricing.

Out of the box, however, IPVanish is the clear choice here. 10 devices should be more than enough for most people, so many users probably won’t need to install the VPN on their routers to begin with.

For setup guides, answers to commonly asked questions, and general troubleshooting, PrivateVPN and IPVanish both do terrific jobs at providing users ample support with their VPN-related concerns. Their websites contain plenty of useful information that empowers users to address problems on their own. However, the similarities between the two competitors end there.

PrivateVPN has two advantages over IPVanish in this category. First, an actual live chat feature is easily accessible from their homepage. Though it isn’t available 24/7, it does function and representatives are friendly and knowledgeable when they’re online. Second, PrivateVPN offers something unique in the industry called Remote Control. This service allows specialists to remotely install and configure the VPN on the end-user’s machine, letting even the most technophobic users easily connect to PrivateVPN tunnels.

IPVanish, on the other hand, has neither of these helpful features.

In the end, PrivateVPN manages to snag the win over IPVanish due to a more attractive and complete featureset. It may fall short in terms of network size, but this is easy to overlook considering all the other things you get. With the ability to unblock Netflix, better customer support, and more device connectivity, PrivateVPN already has enough to trump its competitor’s marginally better performance. Add to the equation their much more competitive price points, and the win becomes truly well-deserved.