Switzerland-based VyprVPN is quite popular among many users, thanks to good server count, geo-diverse locations, fast and secure connections, and multi-platform compatibility. And with a free 3-day trial, it’s certainly an alternative worth considering. Unfortunately, there are some compromises that some users may find hard to swallow. Read on to find out if VyprVPN is for you! 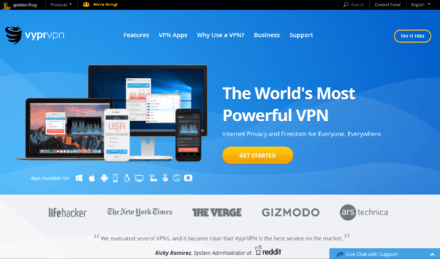 VyprVPN is owned by Golden Frog GmbH, a Switzerland-based company that was founded as a response to growing concerns over internet privacy and the inaction of governments to protect Internet users. Here’s a bit more about VyprVPN:

VyprVPN keeps things simple. They offer two plans, the VyprVPN and VyprVPN Premium. For the most part, both plans offer the same core features. However, going for the Premium plan gets you a few additional perks—such as being able to simultaneously connect more devices to the VPN. Check out the breakdown below to see what their differences are:

As you can see, VyprVPN isn’t the most affordable VPN provider around. Their Premium plan adds a bit more value by allowing more simultaneous connections and adding more features, such as VyprVPN Cloud and Chameleon Protocol (more on these later). However, you’re still looking at $12.95/month. The $9.95/month price tag of their regular plan isn’t all that pocket-friendly either. Those are hefty price tags for VPN subscriptions.

Luckily, you can bring down both plans’ monthly costs by several dollars if you opt for annual billing. But VyprVPN’s refund policy–in which they state refunds aren’t provided at all—doesn’t make annual billing a highly attractive option.

To be fair, the company says that you can still try appealing for a refund, and they might consider giving you one depending on the situation. Refunds are also offered if you happen to subscribe at the same time a 30-day money back promo is running. So, there’s still hope of getting a refund if you’re unsatisfied with their service—but if the right conditions aren’t met, then you’re out of luck.

Here’s a bit of silver lining: you can get a free month of service just by referring a friend. Every time a user signs up via your referral link, finishes the trial period, and successfully subscribes to VyprVPN, you can get a month’s worth of service free.

Oh, and did you know you can try out either one of their plans for 3 whole days, for free? Admittedly, it’s a pretty short trial period, but it should be enough time for you to experience what VyprVPN has to offer before deciding whether to subscribe or not.

And if you do decide to go with VyprVPN, they accept the following payment methods:

VyprVPN currently allows users to connect to any of the 700+ servers they host. Located in 70+ location around the world, servers are spread out across North America, Europe, Asia, Oceania, Central America, Africa, South America, and the Middle East. 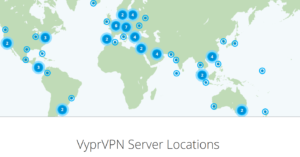 This healthy server geo-diversity means that you can find the best server relative to your location, as well as being able to access geo-restricted content easily. And with unlimited server switching, you can hop between servers as many times as you want without incurring any penalties. Best of all, VyprVPN also features dynamic server switching, which can help prevent servers from being too overloaded—thereby improving overall performance.

How is the Performance of Their VPN Servers?

Did you know that a lot of VPN providers don’t even operate their own servers? Instead, they rely on third party companies to handle server hosting for them. Technically, there is nothing inherently wrong with that, but when third parties are involved, VPN companies can’t always control how servers are handled.

You’ll be glad to know that VyprVPN is one of the few companies that own and manage 100% of their servers. Building their entire network from the ground up, the company made sure to optimize their servers for modern broadband connections. As a result, all that hard work has paid off.

Best of all, VyprVPN features unlimited everything: speed, bandwidth, and, as mentioned earlier, server switching. And since the company does not impose data caps or speed throttling, this makes VyprVPN perfect for downloading files or streaming HD content. That is, depending on how you go about it.

If you’re just downloading content from legitimate sources, such as iTunes, Amazon, and the like, then you should have zero issues. However, if you’re a P2P fanatic, VyprVPN may not be the best option. While the company technically allows users to download via torrent, it will suspend your account if any illegal activity is traced back to you. Other VPNs make it ten times easier to download anything via torrent—meaning your activity isn’t being tracked.

As for Netflix, VyprVPN can stream HD movies and TV shows easily but getting access to the streaming giant’s region-locked content is not possible with this VPN.

How Secure is VyprVPN?

Thanks to multiple VPN protocols, VyprVPN guarantees secure connections regardless of how you’re planning on using the VPN. The company supports PPTP, L2TP/IPsec, OpenVPN, and Chameleon, which is a protocol exclusive to VyprVPN Premium subscribers. The level of encryption depends on which protocol you choose.

On top of the multiple VPN protocols, they also utilize a NAT firewall, which is an additional layer of security that blocks any suspicious traffic from entering your network. And because VyprVPN manages and owns all of their servers, user privacy and security are guaranteed from end-to-end.

But here’s the rub. While they seem to take user privacy seriously, it’s important to note that the company logs some of your activity. The data is then retained for a total of 30 days before being wiped out.

To be fair, VyprVPN only logs a small portion of your activity—not all of it. Here’s what they log:

They use this data as reference for troubleshooting, billing issues, TOS issues, AUP issues, and any illegal activities performed while using their service. It’s not completely invasive, and they do their best to be as transparent about it as possible. Still, it’s something to keep in mind going in—especially when other services offer better zero logs policies.

What Devices are Supported?

One of the great things about VyprVPN is its compatibility with tons of devices and platforms. The company not only offers native apps for Windows, Mac, Android, and iOS, they also have apps for a variety of Tomato-based routers, QNAPs, Android TVs, Apple TVs, smart TVs, Anonabox, and Blackphone.

On top of those platforms, you can also configure DD-WRT, OpenWRT, and ASUSWRT routers to connect to VyprVPN. And finally, they also support BlackBerry 10 and Synology NAS.

How Many Devices Can I Connect to VyprVPN?

However, there is a pretty big caveat that’s not disclosed on VyprVPN’s website. Some VPN providers allow you to bypass limitations on simultaneous connections just by using a router. Doing so allows you to connect as much devices as you want since the router essentially acts as one device. Unfortunately, you won’t be able to do this at VyprVPN, a support agent confirmed.

So, if you need to connect more than 3 or 5 devices, your only choices are to get another subscription or look to another VPN provider.

In addition to all the features discussed earlier, here’s what else VyprVPN offers:

VyprVPN offers comprehensive self-help guides and installation tutorials, so it’s easy to get back on track if you get lost. If you have a concern that self-help guides and FAQs can’t address, you can contact them via email or contact form. Better yet, the company also provides live chat with 24/7 availability. From personal experience, their agents were definitely quick to respond and were very knowledgeable and helpful.

What's the Verdict on VyprVPN?

With first-party servers scattered around the globe, VyprVPN offers easy, fast and secure connections to its more than 700-strong VPN network. In addition, users will no doubt enjoy the unlimited bandwidth, strong multi-platform compatibility and useful third-party integrations, but those who expect absolute privacy and unrestricted torrenting privileges might want to look elsewhere. Unfortunately, the same goes for those who need a VPN for more than 5 devices, and those who can’t live without the safety net of money back guarantees. However, if none of these concerns you, then VyprVPN is definitely worth checking out!