True to its name, Gitarrero Beginner is a simple and straightforward guitar learning program built to acquaint new students with the basics of guitar-playing. Even then, though, Gitarrero Beginner's lesson library has a ridiculously limited scope, without any avenues for progressing to intermediate or advanced level. The ability to adjust lessons' difficult level through different tiers extends the program's longevity a bit, but not enough to keep even beginners from quickly outgrowing the software. There aren't a lot of features in this program, though the simple interface and division of lessons into small, digestible chunks makes for a decent starting point for new students. The one-time payment ultimately puts this on the lower end of the pricing spectrum for this category, but considering what you get, you might be better off spending your money elsewhere. Still, give Gitarrero Beginner a look and see if it works for you. 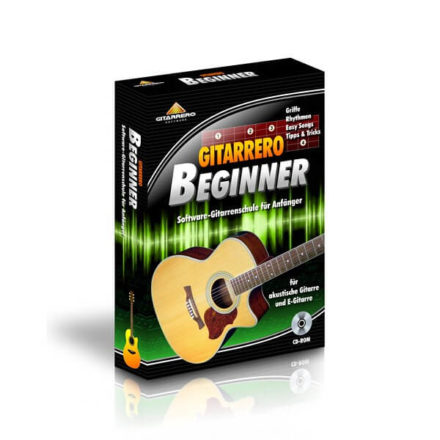 Gitarrero Beginner can be installed through a downloadable module. If you’d like to have a hard copy of the program, you can also order a CD installer for an additional fee.

Not sure if you’re willing to pay for the full version just yet? You can also download a trial version from the Gitarrero website. Depending on the speed of your internet connection, you can grab either the “Maxi-Demo” version with its accompanying introduction video, or the pared-down “Demo” version. Whichever one you choose, you’ll get three of the full program’s 28 lessons to try out, as well as a portion of the Help documentation to teach you how to use the software.

If you do decide to get the full version, here’s what you can expect to pay:

In keeping with the name, Gitarrero Beginner sticks to the basics of guitar-playing. Featuring multimedia lessons that use a combination of text, audio/video, and MIDI tracks, the software takes users through a total of 28 lessons and their corresponding exercises.

That’s right, there are only 28 lessons included in the software package. This is a stark contrast to the many learning sites and resources available online, which often boast of hundreds, if not thousands, of lessons and tutorials. The short list of courses might make starting a less daunting task for beginners, but it will quickly wear thin; even the greenest of students might soon find themselves looking for more material to work with.

The lessons that you do get tend to focus on the very basics. You’ll see tutorials and exercises for guitar chords and rhythm recognition, for example. There are also lessons on finger patterns and strumming techniques, song accompaniment, different rhythmic patterns, and even rhythmic notation. The material is presented both in chord form and standard musical notation, so you can also get better-acquainted with musical elements and symbols as you go along. Practice tracks and exercises can also be looped, so you can focus on particularly tricky sections if you need to.

You can prolong the program’s life a bit by turning to the built-in difficulty adjustment controls. Gitarrero Beginner’s lessons all come in difficulty levels of 1 to 10, and you can jump between tiers to make lessons more manageable or more challenging, as needed. Lower levels tend to focus on single notes and simple rhythms, giving you space to adjust to the new content. Heading to a higher level will mean performing whole sections of a song’s guitar track, with more complex chord changes and progressions as you climb the difficulty ladder.

This is great for taking on a new lesson, since you’ll be able to tweak the material so as not to be too overwhelming. In the long run, the feature also helps you hone your skills further, as you’ll have the option to go through your finished lessons at a much higher difficulty.

It’s worth noting, though, that Gitarrero Beginner only comes with around 100 songs in total. That’s a lot for 28 lessons, but it’s a number that’s still dwarfed by the hundreds of similar tracks that you can access through the other options in this category. There aren’t a lot of additional tools, either. You’ll get a digital tuner, but not a metronome.

Unlike many of its competitors, Gitarrero Beginner also doesn’t offer interactive feedback options that alert you to mistakes as you play. However, you do get access to Gitarrero’s online resources, which include the option to send in questions to Gitarrero’s resident instructors.

Unlike many of its competitors, Gitarrero Beginner doesn’t feature a FAQ page on its website. There’s only one way to reach the Gitarrero team, too: the contact page on the website itself. Users looking for a quick answer or more immediate assistance won’t have much luck here.

What's the Verdict on Gitarrero Beginner?

Avoid At All Costs!

Gitarrero Beginner still has a long way to go before becoming a top-notch guitar learning option. It’s worth a quick look for the advantages presented by its simple interface and easy-to-follow lessons, but ultimately, the program’s limited scope and features put it far behind most of the competition. The one-time payment makes this a relatively affordable choice, but considering what you get for the price, you’re probably better off spending your money elsewhere. Still, if you’d like to try the software for yourself, check out Gitarrero Beginner’s free trial today.