Comic Zeal was the first comic book reader on the App Store, and since then it has consistently made a good claim to being the best. The interface looks great, and you have all the options you need to make sure your comics look equally good on the screen. While there are some hurdles when it comes to importing your comic book files, the quality reading experience that you do get once you view your library through the app is well worth the trouble. 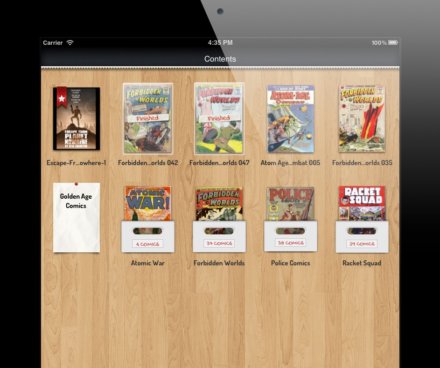 True to its name, Comic Zeal is an app that tries its best to keep you excited about reading comics. It offers numerous features that put you in control of your reading and throws in some small touches that really enhance the whole experience.

First things first, Comic Zeal works with its native .cbi format. The developers have created a companion Comic Zeal Sync program that’s compatible with Windows and Mac, so you can convert comic books of different formats for the app. It’s a minor detail, but it’s best to keep this in mind if you’re thinking of importing a lot of titles.

That small inconvenience aside, though, Comic Zeal offers a host of features that ensure a low learning curve for new users. For one thing, it uses the same gestures as the rest of iOS for standard actions you’ll be using a lot while reading, like tapping to open menus, pinching to zoom, or swiping/dragging to flip pages.

Likewise, you can switch between view modes or modify viewing preferences with a few simple taps. This means you can switch between, say, scrolling through single pages or flipping through two-page spreads in no time. There’s even a slider you can tap to view at the bottom of the screen, so you can breeze through all the pages of any issue if you want. Image display settings like brightness take just as little effort to tweak to your liking.

Comic Zeal has also automated a lot of handy adjustments, so you don’t even need to do much finagling to read comics the way you want. Automatic orientation switching, for example, takes cues from your device’s accelerometer and adjusts accordingly. This means the app can handle issues with a pesky mix of standard and multiple-page spreads without a problem. There are also features like assisted panning, so you don’t get lost when you zoom or scroll across a page.

For users who like keeping track of their progress, Comic Zeal also lets you monitor your reading status. You can, for example, choose to have reminders of how far along you are in an issue. The app also remembers where you leave off, so you can quickly resume reading. You can also mark titles as read or unread, and once you’ve finished an issue, Comic Zeal saves you a few taps by automatically bringing up the next one.

Comic Zeal instantly sorts your titles according to series when you import them, so you might not even need to do a lot of work when it comes to fixing up your library. If you do want to jump in and tweak how the app organizes your files, though, Comic Zeal offers you some handy tools.

True-blue comic book geeks will love Comic Zeal’s organization style. In a throwback to the days before digital comics, the app gives you the option to file issues in virtual longboxes, complete with dividers that you can use to collect titles according to custom categories. You can assign tags to each file, and the app’s search function draws on those custom tags to fetch you titles in seconds. Comic Zeal also has a unique feature called the Slider, which lets you sort and group titles on the fly. Think of it as an ever-present toolbox: you can drag-and-drop titles in the Slider and rearrange them according to your desired order; use it to gather and hold files that you can then drop into any section of the app; create quick reading lists, and more.

Importing Files to Your Library

Comic Zeal gives you a number of ways to import files, which is both a strength and weakness for the app. The myriad options means you can bring files in from practically any source: whether from your computer via USB or Wi-Fi transfer, your cloud storage account via iOS’ document sharing function, or even someone else’s phone via AirDrop.

However, the actual process of importing files through these methods isn’t always as slick as you’d want. Adding files via wired connection requires either the desktop companion app or some digging through your iTunes app library, Wi-Fi transfer needs you to go through your phone or tablet browser, and some cloud storage services like Google Drive require you to go through that service’s own app menus instead of simply opening files from within Comic Zeal. Add to that the need to convert files to the app’s native .cbi, and the process of adding files to your library turns out to be much fiddlier than the neatness of the display might suggest.

Thankfully, there are always the Golden Age comics archives, which you can access directly from within Comic Zeal. If you’d like a break from the task of importing files, you can always go vintage and download some titles from the 1930s and 1940s.

Comic Zeal is available for $4.99 via the App Store. The app has versions for both iPhone and iPad. In-app purchases also grant you additional themes or the use of Comic Finders, which is a feature that collates unread titles from across your library and builds smart lists for easy browsing.

Comic Zeal has a site dedicated to customer support. You can browse through the articles in their knowledge base, and create or look through public discussions where support staff answer any questions or issues. For a handier way to keep track of your queries, you can also create an account that lets you create discussions visible only to the Comic Zeal support team.

What's the Verdict on Comic Zeal?

Comic Zeal is pricier than many of its competitors on the App Store, but this is one case where you really do get what you pay for. It displays comic books in full and gorgeous color on Retina screens, and you control everything through an interface that’s only gotten more sophisticated over the years. The app’s wealth of options is easy to navigate and understand, and you’ve got clever features like the Slider at your disposal. Plus, if you do run into any problems, there’s a dedicated support team ready to help you out. While there are some quibbles with the file importation process, those are minor drawbacks compared to the smooth and intuitive experience that Comic Zeal provides. For iOS users with the cash to spare, Comic Zeal is a good choice.