Amazon’s latest update for its entry level Kindle shows slight improvement. But that’s not a knock on one of the most budget-friendly – but capable – eReaders around. Not only do you get a slimmer build, Amazon has managed to shave off around 16% of weight – which should translate to improved comfort on the reader’s end. More than that, you also get Bluetooth audio so visually impaired readers can still consume content via VoiceView. Heavy night readers might want to stay away though, as the Kindle doesn’t have built-in lights. Its resolution isn’t the best, either. And for fans of physical buttons? You might want to save up for the more expensive Kindles. Still, if budget is a concern, this is definitely worth a look. 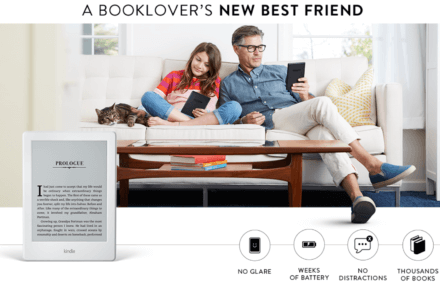 Here lies the reason for the Kindles’ success over the years. Amazon’s eBook ecosystem is second to none, their seamlessly integrated store allowing bookworms from all walks of life access to the largest collection of titles out in the market. Large enough that reports show that most of their revenue comes from eBook purchases than that of any physical sale through the Amazon store.

Unfortunately, all of Amazon’s eReaders – the entry-level Kindle included – are notorious for ignoring .epub files, one of the more popular eBook formats out there. This isn’t an oversight either; Amazon deliberately makes it difficult for people to read third-party software with their devices. It’s a shame that among the most commonly used file types used by publishers. Kindles only support their proprietary file type (AZW and AZW3) plus MOBI files, and various text and image file types. Kindles also support PDF, but take note that these file type don’t show up well on all eReaders nearly 100% of the time.

Sure, it’s possible to convert your .epub books to supported file types, but it can take a lot of maneuvering to get there. If you’re looking for a hard-to-find book, best pray that the Amazon store won’t fail you this time.

Reading is made marginally difficult by the Kindle 2019’s dark display (which this article will dive into later on), but readability in terms of software is second to none. See, the Kindle software is uniform across all Kindle devices, so if you have the $80 Kindle 2019, you’re essentially getting the same software experience as those that shell out $290 for the more luxurious Kindle Oasis.

Kindle offers you seven typefaces to choose from, including the praiseworthy Bookerly and Ember fonts, specially designed by Amazon artists for optimal readability of texts. You can also adjust the font size, line-spacing, and margins to the setting you’re most comfortable reading with.

The Kindle gets smart and modern with its clean home screen. The home screen showcases your current book along with reading lists and suggestions courtesy of Goodreads without cluttering your space.

There’s plenty to praise the Kindle software on; you can look up a word in Wikipedia, highlight and export notes in PDFs and spreadsheets, and even Tweet a quote or two. Kindle’s Whispersync, meanwhile,e allows you to sync any eBook’s audio companion (if available) so you can switch between reading and listening to the hottest titles without losing your place—great for when you want to give your eyes a break.

The feature you’ll absolutely love about the Kindle, though, is the sheer perfection of its Smart Lookup. This nifty little feature fills you in on any character, place, etc. with a simple tap on the screen. The information they show also changes depending on how far into the book you’ve read – handy, especially if you are trying to avoid spoilers.

If not for the low-resolution screen and the lack of LED lights, the 2019 entry-level Kindle definitely outperforms the Kindle Paperwhite in terms of overall build and design. The updated entry-level Kindle, for one thing, has Bluetooth audio to use with VoiceView, which aids visually impaired readers by having the application read content on the screen – a first for any Kindle. So far, Amazon’s keeping mum on whether this neat little feature will find its way on the pricier e-readers like the Kindle Oasis.

In addition, the 2019 Kindle is now also available in white, and can email you your notes and highlights in PDF & spreadsheets. Beyond that, it also looks and feels remarkably less boxy and cheap than before, thanks to the more rounded finish. In fact, it is now much slimmer and lighter than previous models. At 5.07oz, this newest iteration of the Kindle is the second lightest among Amazon’s line of eReaders. This makes holding the Kindle for long periods of time a pleasure, as its reduced weight lessens wrist fatigue.

Check out a quick rundown of the entry-level Kindle’s specs below:

There’s no compromise in performance here despite it being one of the lightest Kindles (second only to the Kindle Oasis). The Kindle’s makeover makes it more portable and more responsive due to the improved RAM, which is twice as much as its earlier model. Though you only get 512MB of RAM, you can expect a marginally smoother software experience.

In terms of display, however, the entry-level Kindle is the worst in the line. They still haven’t upgraded the screen to an E-Ink Carta display, so you are still at the mercy of the old Pearl technology. This means that this Kindle’s screen is the least impressive of the bunch. Its display is off-white with a low 167 ppi resolution, way under the 300 ppi industry standard. To get crisp lines and perfectly balanced contrast, you’ll have to upgrade to at least the Kindle Paperwhite.

As mentioned before, this base Kindle is also lacking built-in LED lights. So, if you were hoping to get some reading done in dimly lit environments, you might want to purchase a third-party clip-on reading light. Or better yet, save up and get a Paperwhite, instead.

Comparing the sensitivity of screens, the 2019 Kindle is quicker to respond though. You’d have to press down a little harder with the Paperwhite, but the 2019 Kindle registers your touch with little to no effort.

In addition to the subpar screen (when compared to the other devices in the Kindle family), the entry-level Kindle also lacks physical navigation buttons. While some people may prefer the touchscreen approach, a lot of people actually prefer physical buttons – or a combination of both (which the more expensive Voyage and Oasis devices offer). It’s not that the touchscreen approach offered by the Kindle is terrible – in fact, typing on it is much more intuitive than before – it is because navigating can become a bit inconvenient at times. It is just much faster to navigate pages using physical buttons, hands down.

What's the Verdict on Kindle?

The Kindle 2019 is the best entry-level eBook reader in the market; it’s well-designed and has the same excellent software that’s available across the more expensive Kindles. It offers a better build, while managing to shave off a good amount of weight that translates to added comfort. Plus, it is the first Kindle ever to offer Bluetooth audio for aiding the visually impaired. Unfortunately, the screen leaves a lot to be desired. For one thing, both the resolution and pixel density are pretty low, so don’t expect crisp text and sharp images. It also doesn’t have a built-in lighting system so you would either have to purchase a separate LED clip-on light, or go for the Paperwhite. Of course, if you aren’t willing to shell out $100 or more for an eReader, Amazon’s entry-level Kindle should definitely be on your list.